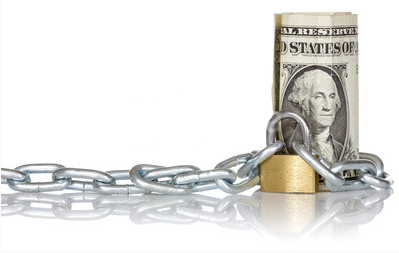 I know that many property managers feel very strongly about refundable security deposits. I have spoken to many of them over the years, and they have outlined several advantages - both real and imagined - most of which can be learned about in this VROG video. But here, I'm going to focus on the dark underbelly of security deposits, so readers beware: it's not for the faint of heart...

Don't they? Who wants to have to cough up another $200, $300, $500, or whatever it is for the property manager to hold over their heads to ensure that they don't damage the property? This "guilty-until-proven-innocent" policy runs against the grain of American values. Plus, it's just another stressor for the guests as they feel they have to babysit this to make sure they get refunded when they return. So they've got this liability nagging in the back of their minds throughout their whole vacation. Fail!

Don't they? If you think about it, there is very little good that can possibly come from a security deposit from the perspective of a credit card company, the issuing bank, or the merchant account. No matter how you implement it, it's a nuisance for them. If you issue a "hold" on the account, then the available balance for the credit card is reduced, leaving less room for more charges that the bank would receive fee revenue from, and on top of that, they don't get any fees for a "hold". Most VR managers that implement this as a charge-then-refund will only do this if they can reverse the charge and also reverse all fees. Again, to the bank, this is nothing but an expense (dealing with two transactions) with absolutely no revenue for it. Moreover, any security deposits that end up being claimed by the VR manager (i.e., for damage) statistically have a higher probability of being challenged by the consumer (guest), dragging the credit card company and/or issuing bank into an arbitration process. This is an expensive pain in the neck for them, with no chance of earning any money from it. Fail!

Don't they? It adds another layer of complexity to an already painstaking rental process. It's just another thing you have to follow-up on before and after the booking is complete. More transactions each year in and out of your account that may be costing you fees in both directions. Many VR managers like to wait until closer to the check-in date to collect the security deposit, partly as a courtesy to the guest, but mainly because they have a better chance of being able to refund it cost-free if it's within 30-60 days. But this creates yet another follow-up correspondence that has to be managed, and also yet another transaction that either the guest or VR manager has to process. And then un-process after check-out. Fail!

Don't they? And for the same reasons that merchant accounts and banks hate them. The vast majority of the time, security deposits are not used to pay for damage. This means that they are either "held" and "released" by the gateway, or they are charged and then refunded (but VR managers almost never implement it this way unless it is totally free), so in either case it's at least two transactions per booking that the gateway gets no revenue from. Placing "Authorize-Holds" on credit cards is also a common technique used by frauders to feel out the value of an account, so a "hold" that goes uncollected for many days raises security flags.

Some VR managers are under the impression that holds are automatically released exactly 30 days after they are placed, but this cannot be relied on. Our research suggests that 30 days is the (legal?) maximum that holds can last, but it could be much less, and is controlled by the policies of the issuing bank of the card used. Some will expire holds after only one day. Some vary the hold period depending on the card tier (silver, gold, platinum, premium, whatever), the specific customer, the specific merchant, and even the specific time of the year. I'm guessing on and around Black Friday most holds might even be dropped within the hour, to make room for other sales that are not pausing on the authorization-hold during the crucial and very busy holiday shopping season. All of this sure seems to put a big question mark on the usefulness of this approach, doesn't it? Fail!

For many of these reasons, the trend in the VR industry is to move away from refundable security deposits. Some are simply dropping them altogether and taking the risk themselves - apparently without much regret. But many are turning to the concept of security deposit "waivers", or damage insurance fees, instead. This is usually a much smaller amount that is charged to the guest, but is not refundable. It is instead bundled in with the rest of the booking costs, and is therefore much easier to deal with as it is simply collected as part of all other cost components of the booking (taxes, cleaning fees, booking fees, etc.) The collected fees can be used to pay (in whole or in part) for the premiums of an actual damage insurance policy, or they can be used to fund a self-indemnification plan - accumulated into an account to pay for damages directly at the discretion of the VR manager. Check your local laws for regulations on these practices before deciding on pricing and policy, but this completely eliminates all of the baggage hanging on refundable security deposits. It is also often quite lucrative for the property manager. Learn more: Integrated Damage Protection.

Some are also offering guests the choice of a traditional, refundable security deposit, or a waiver. But this strikes me as adding even more stress and complexity to the process, as not all bookings could be relied on to be handled the same way.

If it's not obvious after reading all of this, security deposits are a pain in the neck for everyone involved, and they really don't get used all that often to pay for damages. The reality is that over the long term, the amount of money you are likely to spend on damages caused by guests will be trivial compared to almost all of the other costs involved in owning and operating a rental. Advertising, taxes, carpet replacement, furniture upgrades, bathroom and kitchen maintenance, A/C and HVAC, plumbing, replacing linens and towels every year - any of these are likely to outweigh the cost of damages caused by guests. Long-term, you might even spend more on light-bulbs than on guest-induced damages.

So before you make the decision to collect a traditional, refundable security deposit for your vacation rental, consider the sum total of all the stress, complexity, potential for mistakes, paper, and leg work involved - not just for you, but for all parties involved. Then ask yourself if it's truly worth it.   Reply »
Recent Posts: Monthly Archives: Categories: